We are here! I am currently writing this from Drogheda, Ireland in a hotel overlooking a river and a beautiful town. We have our hotel window open to let in the cool breeze and the chirping and singing sounds of the gulls. 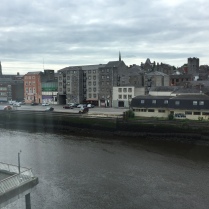 So far, Ireland has been pretty incredible. We arrived this morning (around 09:30 Dublin time) after having a 7 hour overnight flight from Chicago. The flight was fine (long flights are never really considered “good” to me but it also wasn’t notably bad). I met a very nice man from Cork, Ireland at the airport before our flight left Chicago who spoke with me for around 3 hours about Irish culture and the country in general. He was wonderful and gave me a lot of helpful advice. 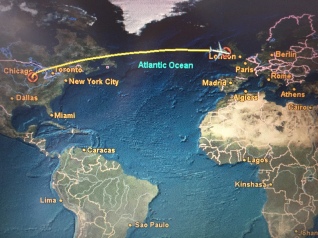 At this point I have slept maybe a total of three hours in the past 36 hours but hey, that’s international traveling! We have found that driving in a different country is definitely not the easiest, especially when habit insists that you drive on the right side. We have managed, though, and somehow remembered to stay in the left lane.

Most of our time today was spent getting our rental car, checking out Bru na Boinne, and finding our hotel and dinner in Drogheda. Bru na Boinne is an amazing area of land and farmland riddled with Neolithic structures. The specific one that we toured was called Newgrange. It is over 5,000 years old and still stands strong and even watertight. It is the only structure of all of them that guests are able to venture inside – which we did. Photography is not allowed inside the structure but believe me, it was incredible. There were many carvings in the stones inside and outside of the building (one is shown below). 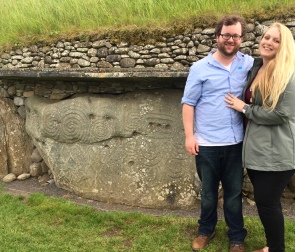 The Bru na Boinne land in general is beautiful – lush and green, just what you would hope to see in Ireland. Seeing Newgrange was fascinating, but the beautiful countryside along the way was breathtaking. 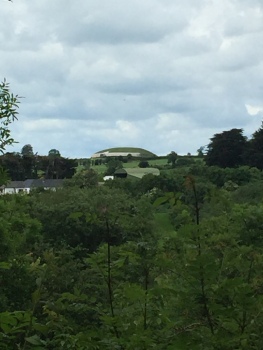 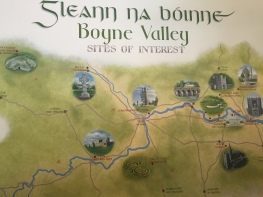 After Bru na Boinne we headed to our hotel, The D, in Drogheda (a small city 30 min. North of Dublin). The little city is beautifully situated along a river, which our hotel overlooked. At that point we were very tired and hungry so we ate fish and chips at the gastro pub connected to the hotel and then tried to get a semi-early night in. 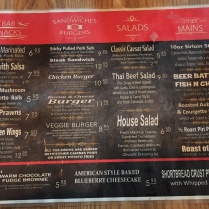 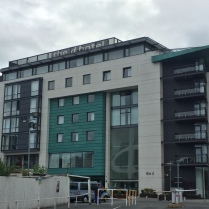 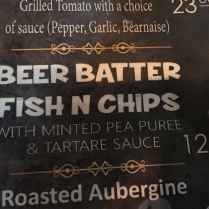 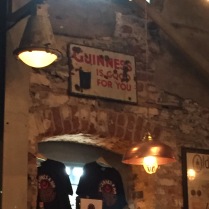 That’s all for now as we have a very early morning on the way to Northern Ireland!