Wow. Today was filled with some absolutely amazing activities and gorgeous sites. We left our hotel in Drogheda around 08:00 this morning and hit the road for Northern Ireland. I drove the entire time today and I have to say, I think I’m getting used to it. The only tough part was when we occasionally would get lost or have to drive on a small  country road barely big enough to fit our vehicle (let alone any other). 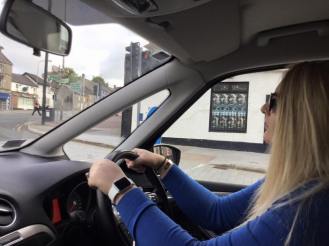 We stopped for breakfast at a place called Gables right off the motorway as we entered Northern Ireland. The staff were very kind and we were able to partake in some great breakfast tea and traditional Irish breakfasts. The meat-eaters in the group seemed intrigued by the blood pudding and were head over heels for the bacon, which looks very different from what I typically think of as bacon in the U.S. 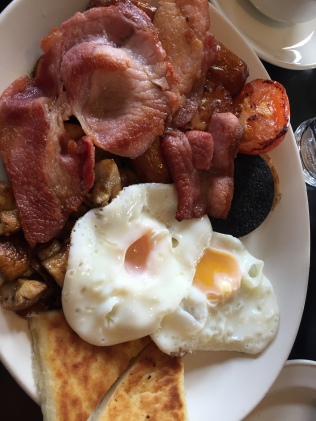 After breakfast, we continued through Northern Ireland to our first place of interest for the day – Dunluce Castle. This castle as a whole is from the 17th century, with some sections dating back to the 13th, and unfortunately it sits in ruins today. It is still very beautiful and rests upon cliffs overlooking the ocean. 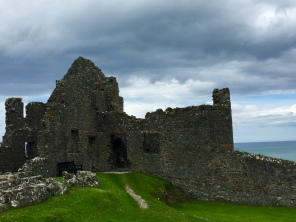 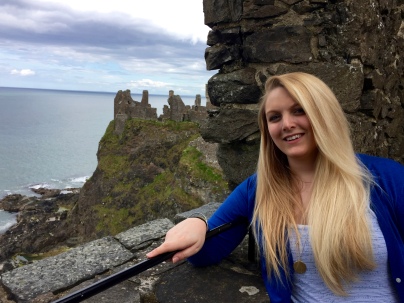 As you can see in the photos we got some cloudy weather, but luckily no rain. It was a gorgeous day to visit. Our second point of interest today was mainly to please a few of the guys in the group – the Old Bushmills Whiskey distillery. Though I am not a fan of whiskey, I still thought the town of Bushmills and the distillery tour were quite fun. The town is small but very inviting and the distillery tour was intriguing (basically like watching processes from my organic chemistry class in much larger format). The tour also ended in samples of Bushmills whiskey which definitely made the men in our group happy. For my sample, I opted for a “Hot Totty” which is a one part whiskey, two parts hot water, cinnamon, cloves and some lemon. 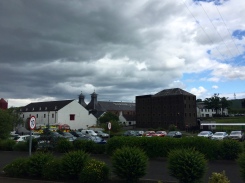 Once we finished our whiskey, it was time to head to our third and most anticipated location of the day – The Giant’s Causeway. What’s great is that all of these locations are actually very close to each other. It didn’t take us long at all to get to The Giant’s Causeway, park, and get into the visitor’s center. Once we walked out of the visitor’s center, we saw a long trail leading by the water and around a  large cliff. The large stones we initially saw were black as charcoal and like nothing I had ever seen in nature – stunning, and not even the main attraction. Once we got farther down the trail and turned to pass the cliff we finally saw it. The Causeway is breathtaking. It looks like an array of interlocking hexagonal basalt columns forming hills in and above the water. It almost seems impossible that something like it could be a result of nature but they were formed  by an ancient volcanic eruption. 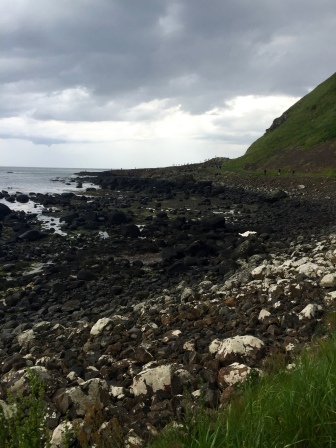 One more thing I found to be quite fascinating about this area was this section of very tall columns where people from around the world had appeared to stick coins in-between the interlocking pieces. There were thousands of these coins and I wondered how long this tradition had continued. Even while I was there looking at all the different coins I saw a man pick up a piece of rock and use it to hammer and wedge a penny in-between two of the pieces. 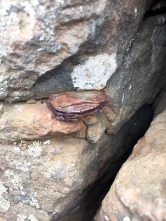 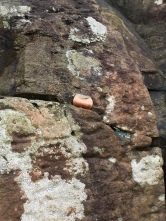 Lastly for today, we needed to start heading back toward the Dublin area where our B&B for the night would be. We wanted to make one more stop along the way. Admittedly, I had never heard of the Dark Hedges until I saw the series ‘Game of Thrones’ but as soon as I did see them in the show, I knew I would want to visit someday. For those of you that have seen the series, the hedges are on the ‘King’s Road’. They are an amazing tunnel of beech trees dating back to the 18th century.  The hedges were not terribly far out of our way but unfortunately we did get a little lost trying to find them. But hey, all is well that ends well, right? We did eventually make it and I am so glad we did.

Also, for anyone that likes ghost stories, there is a beautiful estate located right next to the hedges called Gracehill House that dates back to 1775. According to some local folk-lore, there is a ghost called the Grey Lady that haunts the estate and the hedges. Spooky. 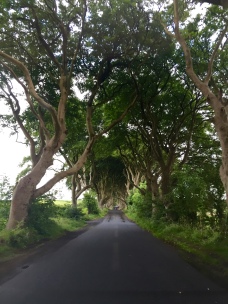 After the hedges and a somewhat long drive, we made it to our B&B located in Julianstown called Keenogue House. It is a beautiful house located on a fully working farm with barns, greenhouses, fields and even a border collie (yay!). I’m sure this will be a great night’s sleep as we were are all quite tired from the adventures of today and have some very comfy looking beds to look forward to. More tomorrow!

One thought on “First Trip to Ireland – Day 2”